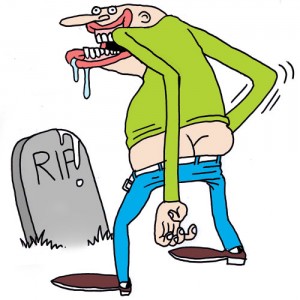 Sometimes schadenfreude just won’t do. In this case you need Epicaricacy, a much fancier and less teutonic word to describe taking sadistic joy in the misfortune of others. If you’re going to be engaging in delectatio morosa, you definitely need Epicaricacy in your vocabulary. It’s an Aristotelian term from a continuum of virtues and emotions; where Nemesis is a righteous negative response to another’s undeserved good fortune, Phthonos is pain caused by the good fortune of others, and Epicaricacy is a gloating pleasure in another’s ill fortune. Etymology: from the Greek: ἐπιχαιρεκακία, epi (upon) + kharis (joy) + kakos (evil).

“The view from the gallows revealed the mob in all its horror. Wyatt felt the rough fibres of the rope on his neck and wondered how a simple lynching could reduce men to a mass of bloodlust, drunkenness and epicaricacy.”